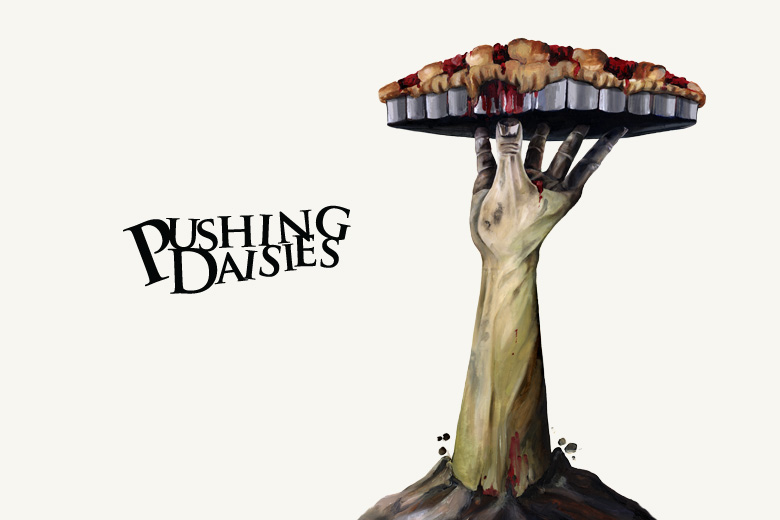 This visually stunning and Emmy-winning forensic fairytale follows Ned (Lee Pace), a pie maker who, as a boy, found he could return the dead briefly to life with one touch. But his random gift isn’t without complications and deadly consequences. For every life he brings back, something in the vicinity of “similar value” must drop dead to maintain balance and order.

In order to save his financially troubled restaurant, The Pie Hole, Ned agrees to work with private investigator Emerson Cod (Chi McBride), using his ability to help solve mysteries. He manages to keep it all a secret from his employee, Olive (Kristen Chenoweth).

Things get truly interesting when Ned rescues his childhood sweetheart, Charlotte “Chuck” Charles (Anna Friel), from death. Now Ned and Chuck must keep her identity a secret, particularly from her two eccentric aunts who raised her, Vivian (Ellen Greene) and Lily (Swoosie Kurtz).

Ned uses his unique powers to bring his childhood crush, Chuck, back to life and solve her murder. But he is also forced to keep his distance from her, because if he touches her, she will be dead forever.

Emerson gets annoyed with Chuck tailing himself and Ned on their cases, while Ned refuses to share secrets with Chuck. For this instance, Ned revives Bernard Slaybeck, an auto safety specialist who was murdered in a hit-and-run.

Ned and Chuck speak to Lawrence Schatz, who they find out died one minute after Ned brought Chuck back to life. Meanwhile, Chuck decides to stay true to her original threat of baking anti-depressants into her aunts’ food, in the form of Ned’s pies. Olive unwillingly becomes the messenger in Chuck’s plan and accidentally stumbles onto a secret about her unrequited lover’s love.

A plane crash into an apartment building leaves the trio with a case—did the pilot commit suicide?—while Chuck finds herself drawn to the man who appears to be the sole survivor, much to Ned’s distress. Meanwhile, Olive takes a wounded messenger pigeon to the aunts for help.

In this Halloween episode, Emerson and Olive track down “the ghost” who’s been killing the jockeys at the old race arena where Olive used to race as a former jockey herself. With help from Ned and Chuck, they try to solve the big mystery.

When a dog breeder is poisoned to death, suspicion falls upon his four wives as well as a businessman who was planning to market his new breed of dog.

A woman dies in a scratch-and-sniff book explosion. Was the scientist who wrote the book the target of the explosion, or was this part of an intentional publicity stunt gone horribly wrong?

The owners of a new candy store hope to put The Pie Hole out of business. And when one of the store’s owners turns up dead, Ned is wrongfully charged with murder.

Ned tries to make amends with Chuck after his confession, and Emerson finds a corpse in ice.

The gang tries to solve a murder of a woman who works for a company that makes beauty products from honey.

The Pie Maker and his friends solve a mystery in the most unlikeliest of places: the circus.

Ned, Chuck, and Emerson go to Olive’s nunnery to solve a murder. However, Olive is nervous that she will reveal to Chuck the secret identity of her real mother.

Emerson’s mom comes to town just in time to help the team investigate the murder of an employee at a professional friendship service business. Chuck and Olive move in together after Olive comes back, but how long will it last?

While the gang investigates a murder at the Dim Sum restaurant below Emerson’s office, a woman from Emerson’s past reenters his life. Meanwhile, Olive and Chuck discover that Ned has twin stepbrothers.

The team investigates the disappearance of the magician who took Ned’s two half-brothers under his wing. Dwight Dixon comes to Lily and Vivian searching for a pocketwatch, and Chuck tries to get Lily to confess that she’s her mother.

The detectives connect the death of a millionaire to a modern day Robin Hood, while also trying to figure out what Dwight is really up to.

Chuck doesn’t tell Ned that she kept her father alive after Ned brought him back, and Dwight Dixon dies because of it. Meanwhile, Ned and Olive are left to solve the murder of one of the contestants at a bake-off.

The Legend of Merle McQuoddy

Emerson and Olive investigate the murder of an infamous lighthouse keeper’s wife, while Chuck’s father schemes to keep Ned and Chuck separated forever.

While Ned and Chuck try to locate the whereabouts of Chuck’s father, Vivian hires a crack team of Norwegian investigators to help find Dwight Dixon.

Ned refuses to help Chuck and Emerson solve the murder of a department store window display artist, and is forced to pose as Olive’s fiancé when Olive’s childhood “kidnappers” arrive after they escape from prison

The death of the man who runs the local dam puts Emerson on a trail that leads back to his ex, and perhaps his long-lost daughter.

One-half of Vivian and Lily’s old rival synchronized swimming team is eaten by a shark during a show, which provides Vivian and Lily with an opportunity to revive their career.