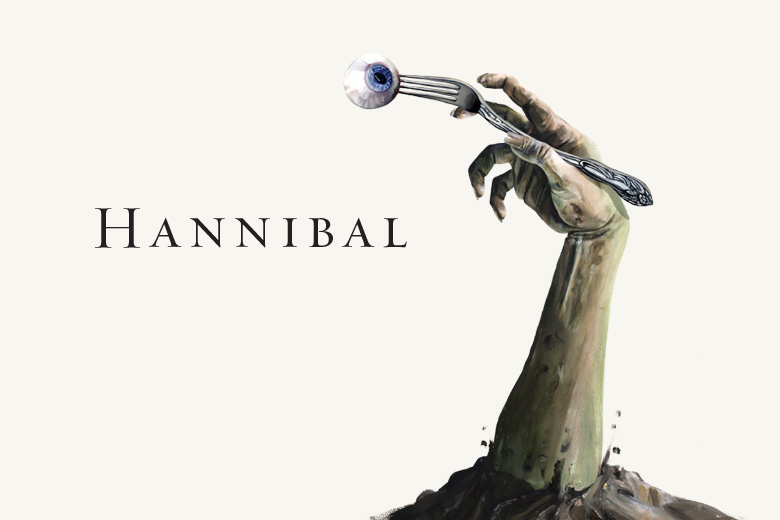 Before Silence of the Lambs, before Red Dragon, Hannibal Lecter was a brilliant psychiatrist in the employ of the FBI. His task: to help an unusually gifted criminal profiler, Will Graham, who is haunted by his ability to see into the minds of serial killers.

After a particularly grueling case hunting a serial killer known as the Minnesota Shrike, Will Graham (Hugh Dancy) threatens to walk away. Jack Crawford (Laurence Fishburne), the head of the FBI’s Behavioral Science Unit, desperately needs Will on his team to break the tough cases, so he enlists Dr. Hannibal Lecter (Mads Mikkelsen), to ensure Will’s mental well-being. Unbeknownst to Will, Hannibal also has a particular insight into these horrible crimes and the psychopaths who commit them. As Will hunts down brutal killers, he is unknowingly sitting across from the most gifted killer of them all.

It is in this cat and mouse game each week that we will begin to see a relationship grow between Will and Hannibal – two men who have more in common than anyone could know.

Unorthodox profiler Will Graham is enlisted by the FBI’s Jack Crawford to catch the Minnesota Shrike, a serial killer who targets young women. When answers prove elusive, they ask noted psychiatrist Dr. Hannibal Lecter to consult on both the case and the mental strain it is causing Will.

Will and Jack hunt a killer who is burying his victims alive, so they will become fertilizer for his garden of fungus. While the tabloid journalist Freddie sets targets in on Will.

Determined to give Abigail closure, Will and Hannibal take Abigail back to the scene of her father’s crimes. But things take a turn for the worse when the copycat killer strikes again.

A series of family murders takes place, and Will determines they were conducted by each of the families’ missing children, who were abducted and brainwashed into killing their old families for their “new family.” Against Alana’s advice, Hannibal checks Abigail out of the hospital for some frightening psychiatric practices that ultimately align her loyalty with him.

A murdered couple is found in a motel room, posed in praying positions with the flesh of their backs opened and strung to the ceiling to give them the appearance of wings. Using hairs collected from the motel pillow, the BAU team discover several medications used to treat brain tumors in the killer’s bloodstream. Graham surmises that the killer is transforming his victims into guardian angels to watch over him because he is afraid of dying in his sleep.

A nurse at the Baltimore State Hospital for the Criminally Insane is brutally murdered by a patient, Dr. Abel Gideon, in a manner reminiscent of the “Chesapeake Ripper”, who hasn’t committed a murder in two years, the same number of years Gideon has been incarcerated. While Graham tries to discover whether Gideon truly is the Ripper, Crawford receives a phone call, apparently from the real Ripper, who plays the recorded voice of Miriam Lass, a trainee Crawford had consulting on the Chesapeake Ripper case two years previously when she suddenly disappeared.

The BAU is called in when a man is found in a hotel room bathtub with his kidney removed and Graham must determine whether this is the act of an organ harvester or if the Chesapeake Ripper has claimed his first victim in two years. Meanwhile, Crawford continues to be haunted by the discovery of Miriam Lass’s arm. Dr. Bloom suspects that Crawford has become obsessed with catching the Ripper, and is putting Graham in danger by making him chase the Ripper.

Lecter’s patient Franklin Froideveaux worries that his friend Tobias may be a psychopath, but Franklin’s growing obsession with Lecter is what concerns the latter more. Graham investigates the murder of a Baltimore musician who had his throat opened and a cello neck inserted through his mouth. Graham, with Lecter’s guidance, interprets this as one killer serenading another. Graham’s mental stability deteriorates further when he begins having auditory hallucinations of animals in pain and when his romantic feelings for Alana Bloom are rejected.

A totem pole of human bodies ranging from freshly killed to decades old are found on a beach and while Graham is investigating the crime scene, he suddenly finds himself in Lecter’s office, three and a half hours away, with no recollection of how he got there. Lecter theorizes that Graham’s mind is trying to escape from having to investigate such brutal murders.

Beth LeBeau is found murdered, having drowned in her own blood as a result of her face being cut into a Glasgow smile. Graham’s mental state continues to sharply decline; he loses hours at a time and when a vivid hallucination causes Graham to contaminate the crime scene, Lecter refers him to a neurologist, an old residency colleague, Dr. Sutcliffe

Dr. Abel Gideon escapes from custody and begins targeting the psychiatrists who attempted to treat him, displaying their bodies with a Colombian necktie. While Alana Bloom is put under protective custody, Gideon kidnaps Dr. Frederick Chilton and lures Freddie Lounds into a trap, forcing her to write an article about him. Meanwhile, Graham’s undiagnosed Encephalitis drives his temperature up, causing severe hallucinations.

Following an offhand comment by Graham, Hannibal leaves a comb in the chamber of Georgia Madchen, who accidentally sparks a fire inside her hyperbaric chamber and is burned to death. Angered, Graham deduces that several recent murders were all the work of a copycat patterning after recent serial murders, and that Georgia was killed because she may have remembered the face of whoever had killed Dr. Sutcliffe.

Following his strange trip to Minnesota, Graham is taken into custody by Crawford for the probable murder of Abigail Hobbs. They find her severed ear in his kitchen sink and her blood under his fingernails. Alana is left devastated by the arrest and is determined to find the cause of Graham’s dementia, despite Crawford’s insistence that there is no underlying cause. She has him draw a clock when he tells her that Dr. Lecter had him perform a similar test, and the results solidify her belief that there is a physical explanation for Graham’s instability.

While Will continues to assert his innocence, Hannibal and Jack try to come to terms with the fact that he’s in jail; Kade Purnell visits Will.

The BAU team narrows in on the origin of the discarded bodies from the soupy crime scene, working to discover the killer’s artful plan, while Will Graham begins an artful plan of his own from within the asylum.

Jack Crawford risks his job by going against the FBI’s directives and revealing to the court that it was his hand that pushed Will to his limit.

The FBI is called in when a dead body is discovered, the skull converted into a beehive. Meanwhile Beverly Katz finds a clue about the mural killer that sends her down a deadly path.

Freddie Lounds finds Beverly’s sectioned corpse; Will meets the copycat killer and orders him to kill Hannibal. Gideon overhears this and gives Alana the chance to save Will from becoming a murderer.

A city councilman’s body is found intertwined with a tree; Jack crashes Hannibal’s dinner party to investigate Will’s suspicions; a revelation shocks everyone.

Will is released from Chilton’s Asylum, while the discovery of Miriam Lass gives Jack new hope in finding the Chesapeake Ripper.

Will assists the investigation into a woman’s body found inside a horse, while Alana frets about Will’s intentions toward Hannibal. With the clock ticking, Will and Hannibal race to protect a witness they believe to be in great peril.

The BAU team look into the case of a truck driver’s body that appears to have been torn apart by two different animal species. Will meets Hannibal’s strange new patient after one of his sessions. Determined to find Will’s true self, Hannibal devises a test but the results surprise him.

Jack and his team cover the truth about the disappearance of Freddie Lounds.

During a therapy session, Will shares a vision of how he would kill Hannibal. Meanwhile, an increasingly impatient Jack brings in a surprise witness to help Will catch Hannibal.

Jack devises a plan to apprehend Hannibal, while Hannibal prepares for his departure. Will makes his decision, and it results in devastating consequences.

After the devastating bloodbath at Lecter’s home Hannibal establishes a new life for himself in Italy along with the company of his own psychiatrist Bedelia.

Will Graham awakes from his coma and begins to piece together the events that took place after the bloodbath at Lecter’s home.

Will travels to Lithuania where he gains a new ally in his search for Hannibal Lecter while Jack Crawford makes his way to Italy with some searching of his own.

Dr. Fredrick Chilton is alive and well, if not somewhat reconstructed, urging those wronged by Hannibal Lecter to use Will Graham as bait to flush him out.

Jack and Will along with Chiyoh arrive in Florence with different agendas for Hannibal while Detective Pazzi gets close.

Bedelia and Hannibal feel their time in Florence is coming to an end; Jack questions Will’s loyalty.

Captured in Italy, Hannibal and Will are brought to Muskrat Farm, where Mason awaits.

Hannibal has been imprisoned for three years at the Baltimore State Hospital when a new villain emerges in one Francis Dolarhyde. Jack reaches out to Will to help him track down the brutal serial killer.

...and the Woman Clothed with the Sun

The search for serial killer Francis Dolarhyde heats up as Will delves into dangerous territory. He envisions himself in Dolarhyde’s psyche and contacts Hannibal Lecter for help in profiling the killer.

...and the Woman Clothed in Sun

Carvings symbolizing the Great Red Dragon are retrieved from crime scenes, casting light on Francis Dolarhyde’s warped psyche. Meanwhile, both Dolarhyde and Will seek the wisdom of Hannibal Lecter.

...and the Beast from the Sea

With a full moon approaching, Jack and Will are certain that Francis Dolarhyde will strike again but they lack a solid lead; Alana gives Hannibal a chance for redemption.

The Number of the Beast Is 666

The FBI enlists the help of Dr. Fredrick Chilton in hope of drawing Francis Dolarhyde into an ambush; Will’s empathy for Dolarhyde impacts his psyche.

The Wrath of the Lamb

Will hatches a cunning plot to slay Francis Dolarhyde, using Hannibal Lecter in his ploy. Bedelia voices concern about the perilous plan as Will continues his game with Hannibal, though Will may have to face his darkest fears.